The Wisdom Of Mae West 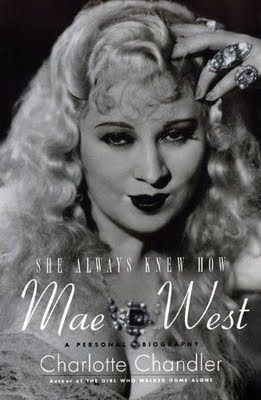 Most folks are familiar with the wit of legendary actress Mae West. Yet how many are aware this woman was not only brilliant, but wise?
I had heard one story about how self-centered she was, that at dinner parties her eyes would glaze over unless she was the topic of conversation. However Charles Eagle Plume told me that when Miss West visited his famous Indian store, she proved to be soft-spoken, gracious, polite and she wore a tasteful white silk pant suit, plus she had "…the softest, most beautiful white skin I've ever seen."
A series of synchronistic associations led me to study that woman more closely. Sometime late last year, a mention of the great American writer Gore Vidal led me to think of his novel MYRA BRECKINRIDGE

, which I recalled trying to read as a kid back in the '60s. I only found the "dirty" parts interesting at the time, having no clear idea of what it was all about. Though I knew that it was made into a film and heard that Miss West came out of cinematic retirement to participate, again, I missed it. Now I'm able to appreciate that crazy as the book is, Vidal's prose is exquisite.
Then I discovered that the film was also available in a restored version. MYRA

the film turned out to be a lot more fascinating than I expected, having always heard how awful it was. What a curious artifact of the late 1960s! Raquel Welch acts her little heart out in fine style and Mae, as always is, well, Mae! I'm not saying its a great film, yet it's definitely, significant and funny, well worth seeing or even owning if you collect films.
Even the notorious SEXTETTE

, the great woman's swan song turned out to be quite wonderful! She makes it so.
This led more recently to a Netflix review of Miss West's older films--which I realized I had only glimpsed bits of on TV long ago when I used to watch television. I'd never really studied her films with a brain. The best of those, in my opinion are GO WEST YOUNG MAN and SHE DONE HIM WRONG

. The latter two demonstrate that the great woman was a lot more than a saucy, suggestive wit: she was also an excellent actress. SHE DONE HIM WRONG is truly a great film.
Only the biggest revelation about her came with more research into who Miss West really was. Turns out that privately those who knew her found her to be loving and generous. She was not merely a sensual creature; she worked extremely hard at her writing and forever persisted in her projects. Indeed she appeared at just the right time to promote healthier attitudes towards sensuality and ironically, about the independence of women. However her statement, "I believe with a passion in myself" is what impressed me most. Her self-respect and positive thinking were astonishing!
Among my treasures now is a superb bio, mostly in her own words from extended interviews Miss West gave to Charlotte Chandler just a few months before she died in 1980: SHE ALWAYS KNEW HOW.
What choice reading this is, because, indeed she did know!
Posted by Bruce P. Grether at 6:20 AM