Everything Is New: Always! All Ways! 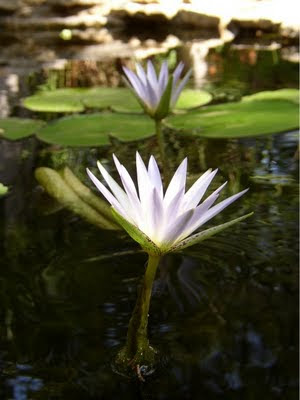 For the first time so far, two blossoms of the Egyptian Blue Lotus have opened upon our upper lily pond. We planted it there just last year and during 2010 it produced a series of exquisite blossoms, one at a time. Now I suppose the roots, down underwater in their unseen pot have grown.
Quite often I hear people (including myself) say "There's a first time for everything." Then sometimes, "There's nothing new under the Sun." Of course, it's not an either/or matter, if anything is!
Perhaps my favorite Creation story is also about the simplest I know and it makes total sense when I sit on the little limestone bench and ponder the actual Egyptian Blue Lotus. From that unseen Source below the surface, which you could call the Void, the bud mysteriously rises to the surface, and lifts its pointy little green head into the air. When the gentle, warm morning Sun grows bright enough, the magick happens--the flower opens and the perfection of the world comes into being. Most mysterious and amazing of all is that the flower and the Sun create each other.
The Egyptians said the Sun God Ra was born from the center of this flower and it does have a fragrant, golden heart. Plus those clever Indus Valley people to the East gave rise to similar stories of Brahma, the Creator appearing upon a lotus.
As I mention in THE 9 REALITIES OF STARDUST: A GUIDE TO BEING HUMAN IN THE UNIVERSE reality is actually always, all ways plural: realities! There is never just one, unless you're talking about Oneness itself, which you cannot effectively speak of at all, for it simply IS! Words create; words also limit. Both/and.
Is all that confusing enough? No worries… just let it ripple on by and open it's petals into the gentle early morning Sun, as the god called Nefertum: Beautiful Young Lord Of Morning Who Creates Himself By Loving Himself.
Now allow the flower itself to speak of Creation and Love, only not in words… 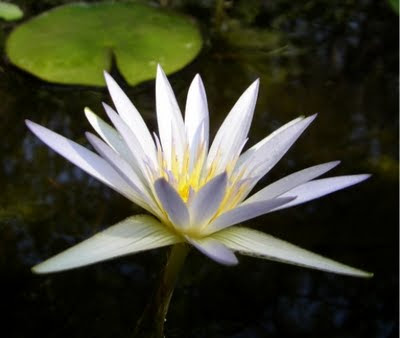