Re-learn to Read for Pleasure and Wisdom 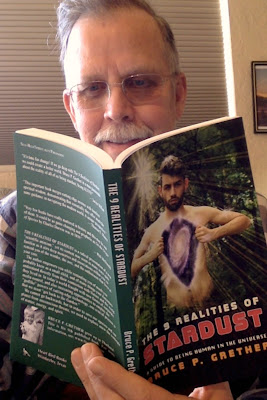 Symbolic language can serve as a prison, barring you from direct contact with actual experience of your body in the DNA-mediated realities of the material world. However language is also, as one of the oldest forms of real human Magick (perhaps the oldest), a creative tool for both your educational and recreational enjoyment.

Here I refer to your ability to craft written language and also your ability to enjoy reading texts, such as printed books, magazines, journals. Closer to the end of this book I will suggest means of using other “offline” and somewhat old-fashioned media to deliberately subvert the influences of Big Tech and the Internet connectivity that about half of the humans on the planet now experience.

Clearly Big Tech provides many benefits and possibly crucial advantages to our species, along with serious drawbacks in the form of control and manipulation of our choices. Also, electronic media produces a distraction factor and can reduce your attention span.

For example, the ability to read printed books and concentrate on printed texts in magazines and journals can suffer from eroded attention span. Consider, do you read printed books or texts for pleasure? With such seductive Internet media at the fingertips of about half of the humans on the planet, enjoyment of offline media may become a challenge. To read a text on a screen is fundamentally different.

While online, you can always dart away from wherever you are to check email, Facebook, or someone may message you. You may grow accustomed to beeps and intrusions, but are you able to focus on a book, able to surrender and dive into a longer text for the pure enjoyment of reading?

Some of us need to periodically, deliberately disconnect from electronic media in order to re-discover the private personal sanctuary provided by printed texts, both for education and recreation.

This is so worth the effort!

The wonderful worlds that reading printed texts can take you into, whether the texts are considered fiction or non-fiction, are in truth all equally real and equally imaginary worlds. They exist in your mind.

The Saga of THE MOONTUSK CHRONICLES 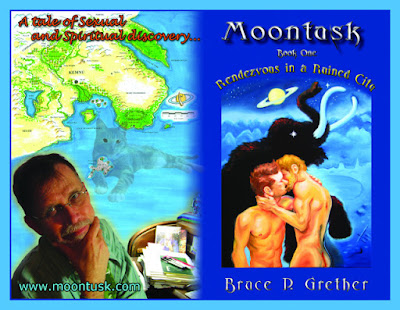 About 35 years ago when I lived in Estes Park, Colorado, one night I had a vivid and detailed dream about a handsome young man of perhaps 19 years, who left his home of privilege with only his dog for company and launched on an epic journey to seek enlightenment and Love. When I awoke, I immediately wrote down as much detail from the dream as I could remember (a great deal as it turned out) and soon realized that was only the beginning. When I read through the story, as sometimes happens with imaginative fiction writers, I found I could easily enter again that rather fantastic world where, among other wonders, woolly mammoths survived, and the Moon had rings something like our planet Saturn.

Another element of the story was that the young man, like me, loved to masturbate but he was just beginning to learn to do so with any real skill, and his sexual attraction was towards member of his own sex. As I kept writing, the story grew from there, the only major change was that the dog in the story became a more unusual creature I call a "chameleon cat," able to render itself virtually invisible. My hero Dare (full name: Darrow Bardoon Miznevet III) thought that upon leaving home he would seek enlightenment. His adventures actually led him to discover the love of his life, another young man, Hosis (full name: Hosis Bar Sun), from a far northwestern country where mammoths were the sacred animals.

While Dare comes from a land with an openly homophobic culture, Hosis comes from Loonapoore, where all sexuality is so inhibited and hidden that a secret cult that teaches men the Phallic Mysteries thrives. In the course of the four novels of THE MOONTUSK CHRONICLES Hosis teaches Dare those secrets. As Shakespeare said, "the course of true love never did run smoothe," so the young lovers experience all sorts of awful challenges, as well as plentiful erotic ecstasy, depicted in graphic detail. I've never read a case of detailed world-building, good character and plot development, in the high fantasy genre that was also this erotically explicit, so I ended up writing it myself.

One criticism the first book, RENDEZVOUS IN A RUINED CITY, has received is because a woman manages to seduce young Dare before he meets Hosis, and though their relationship is not so explicit, it reflects some of my own early experience. I've always been attracted to my fellow men, but in my youth, some women wanted me, and I surrendered. Well, THE MOONTUSK CHRONICLES are not exactly autobiographical, but in an imaginary way, they are my own story.

You can find Book One by clicking HERE.
Posted by Bruce P. Grether at 9:03 AM 0 comments