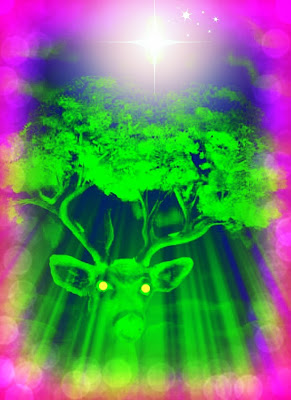 Life grows longer and stronger
With every heartbeat, each breath
As the pathways open their arms before you
Yet the quantum wave function collapses in death.

Don’t forget the Sea God’s Trident—
The summoning conch trumpet;
The Pharos Lighthouse stands
Sentinel before the harbor of your dreams:
Don’t forget.

This Holy Night sprouts antlers
That are golden boughs where mistletoe bristles
Where every whispering Druid plays his part
And remembers that sting of Lord Balder’s murder—
Antlers branch forth from the darkest heart.

Each one stands alone
Within the crimson glow of the four-chambered heart;
Ancestors stand in tender infinity
Of living, shimmering stardust
Empowered by sacred desire
Behind each living, arising form
Within each crown of creation,
Each culminating mystery
Of living atomic fire.

An Exquisite and Vibrant Epic Tale 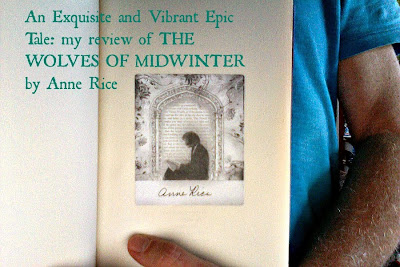 Bruce P. Grether's review of THE WOLVES OF MIDWINTER by Anne Rice


Though The Wolves of Midwinter, Anne Rice’s latest novel, arrived at my home on publication day, I’ve waited a while to write my review in order to carefully consider why I feel it’s so superb. Immediately upon receiving the beautifully printed and bound hardcover, I placed in the front one of the signed bookplates sent to me by the author. Let me apologize ahead of time for the over-use of superlatives…

Though this novel clocks in at no more than 388 pages, it exemplifies the best qualities of an epic tale. This truly is an epic journey that embraces and enfolds you and sweeps you away, and you don’t want it to end! It’s a journey in which a great deal of ground is covered and many, varied adventurers unfold, though none of them seems rendered in haste. At the same time, there’s no unnecessary padding—the prose is lean and clean, with a classic undertone and still it sounds contemporary. I feel that Anne’s somewhat “experimental” prose of Blood Canticle, the last Vampire Chronicle, with an almost jazz-like quality, and all of her writings since then feed into the quality of this one.

When I reached the satisfying conclusion, I would gladly have continued all the way through yet another volume of this series, that third novel which is hopefully on its way before long. In this fantastic follow-up to The Wolf Gift, various mysteries and revelations draw the reader all the way through.

Wolves may be Anne Rice’s finest writing so far, in my opinion, every bit as fresh and entrancing as her first novel, Interview with the Vampire, and as skillful, meticulous and alive as Christ the Lord: The Road to Cana. With this return to the realm of Nideck Point, the story feels like a genuine interval of life; several major plotlines gracefully interweave, and we encounter no less than two new species of immortals. (You could count three species, if you include a certain tormented ghost.)

Something I especially love about this tale is the fact that through most of the novel it is raining! The rainfall becomes intensely atmospheric and holds the entire book together somehow. The northern California coast and redwood forest setting, plus the magnificent old house of Nideck Point, and the nearby village are wonderful to experience and inhabit during the interim. I love the places as much as I love the people.

More than ever before, Anne employs a vivid economy of means to bring this journey alive in the mind’s eye, and in the heart of the reader.

Of particular fascination are the two entirely new species of immortals, the “Beloved Minions” and the Forest Gentry, both central to the story. The Wolves of Midwinter also offers significant developments in the story of Reuben Golding’s tormented brother, Jim, and their father, Phil, a man under-appreciated by his family. At one point, Phil asks a question important to everyone: “Why don’t people do what they really want to do, Reuben?”

Anne also delivers the kind of truly astonishing moments she is capable of rendering in the last brief chapter of the book, including a wonderful revelation that concerns Phil and one of the “Minions”—so anyone wishing to be totally surprised, don’t peek!