Willy The Crazy And Wonderful

To really love someone with all your heart is dangerous. Love is ferocious and sometimes painful. It's a physical sensation I can feel in my chest, like a pressure. And yet how else can you really feel totally alive? There's nothing safe about life.
In my blog about "Calling The Toads" I mentioned really loving and being loved as something real and true--unlike perhaps 99% of the rest of our thoughts, ideas, images, and beliefs about reality. This is what John Lennon meant when he said, "Yoko and me, that's reality." At the time he wrote that, he had whittled his awareness down to a primal core of actuality. If we can be honest, most of what we believe is real or true has no validity--it's just opinions and ideas.
I've been so cerebral all my life, I adore this material world, Nature. Bodies. Matter.
My youngest child Willy, pictured below is over a year old now, and he's not a replacement for his late, beloved older brother James. No. Willy is a crazy cat in his own right, a suitable comrade for a crazy writer and artist like me. 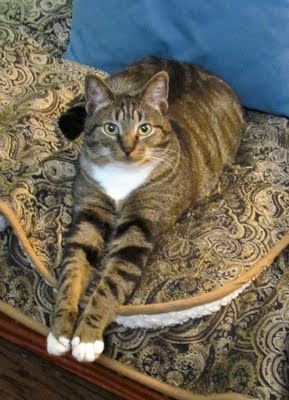 There is indeed this thing about writers and cats. All sorts of other varieties of people appreciate the company of felines. However a serious writer tends to be a recluse a lot of the time, totally self-absorbed, or at least focused on the task at hand to the exclusion of all else. Only a "dog person" could think cats are actually aloof, however cats will put up with a lot more distraction on the part of their human than a dog. Cats are, of course, great meditators and nappers as well as yogis.
Dogs are simply higher maintenance. Perhaps some more balanced writers appreciate that neediness yanking them out of their writing trance… only I'm not that balanced. At this point, it would not be fair to the dog for me to have that kind of child.
Willy is a totally brat, as any cat deserves to be. He can get quite aggressive and rambunctious if he feels neglected. However during my early AM spells of writing and editing at the iMac here, he's often happy to stay curled up on my lap and meditate as an alternative to active playtime.
Then, when my eyes get bleary at the monitor, it's healthy for me to break from my trance, stand and stretch and then toss some of his little paper balls around. You should see that little buddy jump and spike a ball down over the net. Or we race around and around through the adjoining office and bathroom playing peekaboo and fluff-your-tail behind the doors.
He's been a life-saver since James died and I couldn't shake the sadness. He makes me laugh and lights up my life. Though it's no longer actually his "baby food," he still loves the ritual of having me offer a sprinkle of "You want some of Your Precious Baby Willy Food?" into the hopper, and then with a satisfied "Prrt," he chows down.
He was a mere handful when he arrived in the spring of 2010 and he's huge now. Willy's a talker, and that voice gets me every time.
He's also as real and true as it gets.
Posted by Bruce P. Grether at 4:08 PM