The recent death of the most famous, acclaimed, and notorious of East Indian gurus, Sathya Sai Baba, has proven a major ink-blot test and a perfect example of how belief determines our experience.
Whether an observer believes Sai Baba was (is?) a faker of fraudulent miracles and possibly a sexual opportunist, or a genuine high yogi and possible avatar, depends entirely on the observer's beliefs! It's also an intriguing measure of skepticism and open-mindedness.
My own awareness of this remarkable man who ended up with an estimated 30 million followers worldwide and who received some 8-to-9 billion dollars in gifts and donations during his lifetime, began in 1972 in Berkeley, California. In a metal fabrication and casting class I attended at the California College of Arts and Crafts in Oakland, I became friends with a man named Gail who had been in the marines and after that went to India.
On the sub-continent he went to Puttaparthi, witnessed Sai Baba's miracles and met him and returned to the USA with a pendant that had been summoned from thin air for him + a packet of vibhuti or sacred ash also manifested by Sai Baba. Intrigued by all this and curious, I went with Gail over to San Francisco to chant bhajans or holy songs in honor of Sai with a little group.
Though I've never been a follower of anyone, really, nor religious, something in my gut told me Sai Baba was the real deal, the big enchilada of gurus; I felt he was simply someone with a different relationship to spacetime and matter than most folks. His teachings held particular appeal, as he told his "followers" not to abandon their own beliefs, and he required no codified behaviors. He had no wish to be worshiped, only to inspire devotion to God. 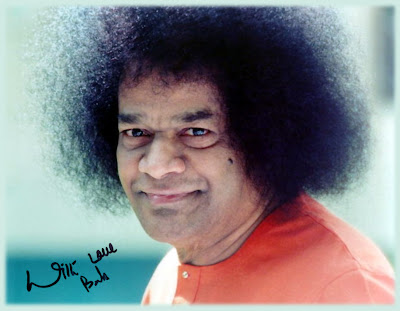 "I am God," he admitted, but added, "You too are God. The only difference between you and me is that while I am aware of it, you are completely unaware." If you can know someone by their works, Sai Baba did a great deal of practical good, spending most of those billions of $$$ given to him to build hospitals, orphanages and schools all over India. Once for a major soccer game he arranged, he had a stadium built at Puttaparthi!
Not long ago, when I heard that Sai Baba was hospitalized and not doing well in his 80s, for some reason I decided to check out the various reports of fakery and sexual abuse. There are plenty of vids on youtube and elsewhere online trying to prove such allegations. It did not take much investigation to track down the real origins of those attack on the man's integrity in the Christian fundamentalist camps of the most rabid sort.
Of course, some skepticism about the miracles comes from the overly-rational closed minds of scientific thinkers, as well. At any rate, I really sought to evaluate it all as objectively as possible and now more than ever I feel that Sai was an authentic avatar.
My own personal encounter with the man came in 1973. By then I lived in a seedy little roach-infested apartment in Oakland near CCAC. I'd recently had most of the paintings I did over several years all stolen in one night and was in the process of flipping out. My obsession for a while became going to India. "If only I can go see Sai Baba and sit at his feet, I'll be fine!" was my thought.
One night, in the middle of the night I woke up. Standing in a corner of my bedroom was a tiny dark-skinned man with a huge fluffy afro and a saffron-colored gown to the floor. He smiled and extended open hands towards me. "You don't need to come to India to see me!" he said. "I'm here with you, as I AM everywhere."
Of course, has I gone to India, I would have taken my problems with me, as we always do; only I took Sai's advice and I'm grateful to him to this day.
Posted by Bruce P. Grether at 4:27 AM