We Are NOW The Gods Of The Ancient World!

Decades in the past the famous and wonderful science-fiction writer Arthur C. Clarke said something like: "Any sufficiently advanced technology is indistinguishable from magic." Of course, this means in relation to the generally primitive awareness of 99% of the population of bipedal primates at any given time. It need not be taken as a cynical judgment to observe that the vast majority of humanity is usually absorbed in a welter of conditioned superstitions and willful ignorance.
It can be tough to be not only ahead of the crowd, but like some of us living backward in time (consider  Merlin, Aleister Crowley, Robert Anton Wilson, Timothy Leary as examples) as futants, or time-travelers from the genetic potentials for future human possibilities. Now I do not personally claim to be "from the future." However if that was literally true it could explain a lot about me and my life.
For instance I recently found the following somewhat bizarre bit of poetry in my archives:
"We are the gods of the ancient world:
I am Osiris and you are Isis --
I am David Bowie, you are David Bowie." 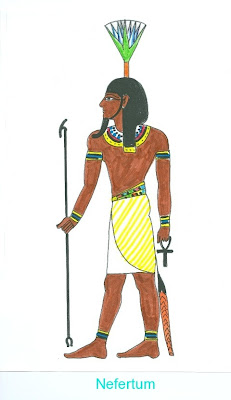 Odd as that bit of poetry may sound to my more mature and clear-headed self at my current years of 57, I know precisely what I meant. Current realities are like science-fiction compared with this world, our civilization and our species of only a few years ago. Of course, 100 years ago, manned flight was a fantastic idea. 50 years ago walking on the moon was still a fantasy. Not much more than 40 years past, on a certain August morning of 1969 Grace Slick gazed out around daybreak over a crown of 1/2 million or so bipedal primates most of whom were mutating rapidly and she said:
"Good morning people! You have heard the heavy groups, now you will see morning maniac music, believe me. It's a new dawn!"
The house of cards we call human civilization now collapses at an accelerating pace. The Berlin Wall fell; the Internet has hard-wired the Global Brain to wake up; now its wireless and evolving at an exponential rate. That thing called Spontaneous Evolution

is the greatest hope for the planet now, maybe the only hope--something comparable to spontaneous remissions only on a collective evolutionary level for our species.
How easily we accept as everyday realities the godlike powers that technology hands us as we become cyborgs hooked mentally and functionally into incredible extensions such as iPhones, Kindles, Twitter, and all their ilk.
I'm all for the wiser use of technology to help save the planet, however what we need even more is to reconnect not with Cyberia (we're already there a lot!) so much as the DNA-mediated reality of our bodies, fully present in the material world now. Nature itself IS the Source. 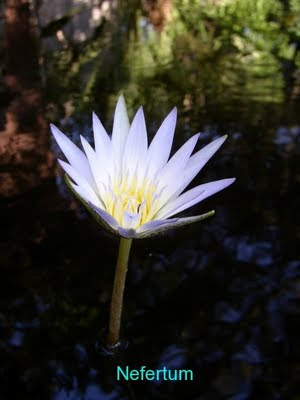 As the Egyptian Blue Lotus (actually a water lily called Nymphaea caerulea) prepares to put up its first bud of the year in Paradise Garden, I'm reminded--to the ancients nothing was metaphorical or symbolic as we've disconnected from meanings. To them imagery was literally and filled with vibrant, vital life-force.
This plant really IS the ancient god Nefertum: Beautiful Young Lord of the Rising Sun!
Posted by Bruce P. Grether at 4:48 AM