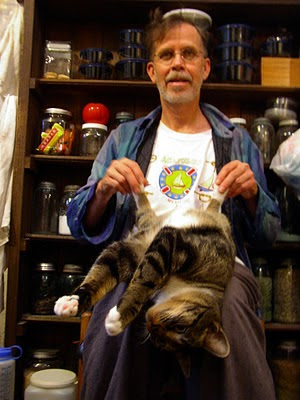 My youngest child Willy--like many of us when we were young--likes to look at the world from an upside-down perspective quite often. I rather doubt that he actually imagines the ceiling is the floor, as so many human kids have done before. Still there is something about this perspective that fascinates him, as you can see from the evidence above.
Every bit as significant about Willy is how he changes my perspectives simply by his lively, talkative, and wonderful presence in my life. His other papa, Tomas, sometimes reminds me that when I'm absorbed in my writing chores,* I may not be playing with Willy enough. Willy's just over a year old, he's the light of my life and he totally deserves to be played with! I try to take breaks and play with him periodically every day. It's as good for me as it is for him!
In fact, when I fail to do so enough, this kid is inclined to attack me and sometimes he still draws blood. No doubt I deserve it. He's 100% authentic, present, and never gets lost in stories in his mind. That short list in itself is only a few of the ways in which Willy is wise and wonderful.
Of course, when I mention the wisdom of animals, I'm not talking about what science means by intelligence, sometimes associated with brain size or nervous system complexity, or those silly and often totally misleading tests. Though intelligence may be more amenable to some forms of evaluation, if not measurement . . . wisdom comes from within.
In humans I'll even say that I feel wisdom comes from the heart. It's not acquired information, as much that passes for intelligence really is. That's often merely the manipulation of knowledge or information.
Wisdom is the knowing that emerges from within.
For humans this may be a matter of remembering what we have forgotten that we already know. For animals, it seems they do not forget what really matters. They remain connected with that inner source of knowing. It's more than what we call"instinct," it's genuine presence.
Animals are not literally Buddhists, of course! They are far too wise to have a religion. However, Willy's other papa and I were having a discussion not long ago and Tomas said, "I think that's where Buddhism really comes from--just watching animals."
"What do you mean?" I said, intrigued.
"Well, you know, the story is that Lord Buddha spent a lot of time in the forest before his awakening, a lot of the time alone, except for some animals and plants. If you watch animals, you can see how alert they are to what's going on, how they don't disconnect mentally like humans do."
"Gosh, I know what you mean! And I've always figured the tree Lord Buddha sat under under had more to do with it than some folks might imagine. If you really listen, trees know what's going on. No doubt that helped him too."
"Sure," Tomas said. "It's really just about alertness, paying attention. Being present."
Since then, even when Willy gets wound up, his pupils dilate and he's even a bit dangerous, I have to respect him more than ever. He's phenomenal. He's a lot of fun. Plus he's wise.
And in a way, he might even be a Buddhist.
______________________________________________________
* By the way, most of what absorbs me these days is a new draft of Moontusk Book Two: Orchid of Awakening, the sequel to my recently published novel. If you haven't checked out Book One, please take a look!
Posted by Bruce P. Grether at 12:31 PM