The Bright Side Of Devastating Loss

Before I moved from Colorado to Texas to live with Tomas, sometime before 1996 it must have been, I gifted my friend Marilynn with a painting I had made of Long's Peak. In fact, that particular painting had been commissioned years before that time by my parents as a gift for my grandmother, who had lived in Estes Park for some years. That particular mountain presides as a majestic presence over the entire valley that the Native Americans called "The Circle."
I recall that my parents asked that I create a straightforward, simple landscape without any surreal or mind-manifesting elements such as adding a flying whale, a spaceship, or an inter-dimensional portal as I might have done had I been painting purely for myself. Therefore, though the painting came out quite well, I found it relatively uninteresting, however my grandmother loved it! That's what mattered then. 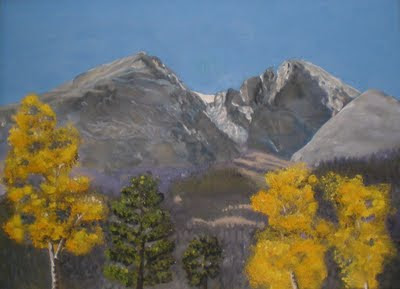 Late on after my grandmother died, the painting returned to me. One day while Marilynn visited me it must have caught her eye. As yet another fan of that particular mountain which rises 14,256 feet above sea level, she expressed her admiration, so I gave it to her. That was also a long time ago.
More recently, contacting me on Facebook Marilynn sent some snaps of this image I had totally forgotten. She was nice enough to re-photograph it in better light, then she even decided to have it nicely re-framed with a dark, more effective frame. That pleased me.
However the whole matter also brought up some bittersweet memories and it proved useful to consider what good came from some far less pleasant experiences . . .
Twice I've had many years of oil painting stolen. In the first case about 70 or 80 painting, the second time at least 100 or more. The first occasion was when I was a student at the California College of Arts and Crafts in Oakland, California, in 1973. I loaded the car full of paintings for a semester-end comprehensive critique, drove down from the Berkeley hills. On the campus I stored them overnight in a storage room that the janitor safely locked for me. Safely? Well, in the morning every one of those paintings was gone.
I thought I was OK, only I suppose I flipped out. It was like a grief not properly grieved, I guess--within a short time I had a nervous breakdown that I did not then even connect with the loss. Probably I was not thinking clearly at the time! Soon I dropped out of Fine Arts after two years at CCAC.
Many years later, in 1988 I lived in Estes Park, Colorado, where I had been healing psychologically for 12 years. I'd been painting again like a fiend, for years, and stored most of the work in an attic at the old Elkhorn Lodge where I had an apartment. When I moved to a tiny cabin with my new kitten Taliesin, I asked someone I thought was a friend if I could store most of the painting for a while in her garage. She agreed. A few months later when I moved down to Fort Collins, I returned to Estes to retrieve my paintings . . . my "friend" had moved away from town without letting me know and all those artworks vanished with her.
This time, instead of a psychological implosion and the series of ego-deaths that followed the first such loss, I simply shifted gears to writing and did no more painting for a long, long time.
It's not a pity party, this account. The first time, going crazy for a few years humanized me and led to me learning how to take better care of myself. The second major loss inspired me to take up writing full-time, go back to school at CSU, where I finally got a degree.
Now about 20 years later, I've started painting in oils again and it's a return to a part of me that has been missing . . . and I'm still writing a lot too.
Something wonderful can come out of anything, I feel this more strongly than ever.
Plus, as the song says, "Don't look back."
Posted by Bruce P. Grether at 3:48 AM