Why Plants Are Smarter Than We Are!

was inspired by his early psychedelic experiences. Of course the film is not only visually dazzling, but deeply ecosexual. In a nice synchronicity, Tomas and I had just obtained the Extended Edition of the film. With its powerful depiction of the Na'vi natives of the moon Pandora, so attuned to the living web of their environment, this is not merely escapist fare.
Cameron's film is really about our own planet; its real message is how urgently we ourselves need to reconnect with Nature.
This can only be done with deep humility and willingness to overturn common assumptions--for example that we are the crown of creation; also that animals are superior to plants. Ahem! Excuse me! In reality we know that the vegetative ancestors of the biosphere go back far longer than what we now call animals. In fact, it is quite clear that animals evolved later on to serve the purposes of the plant intelligence. Remember, plants create our oxygen and feed everything on Earth. The only exception are a few deep-sea chemical feeders at thermal vents deep under the ocean. 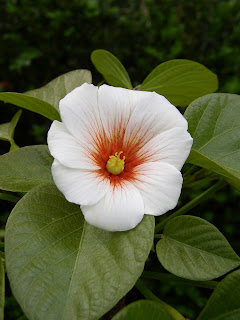 Animals are mobile units serving plants by pollenating, distributing seeds and spores, pruning and browsing vegetation, fertilizing, and in the case of humans, propagating, cultivating and irrigating plant life.
Also, though plants lack the nervous system or brain of animals, plants are intensely aware, responsive to their environments; they communicate, and provide materials, medicine--Life! Plants are obviously elders to respect and the higher intelligence within the biosphere!
Another assumption that has been challenged of late is the descent of animals from plants. In reality, animal life may have evolved from the kingdom we call the fungi, rather than plants per se. Yup! Both evidence and theory now suggests that animals evolved from fungi that learned how to surround their food with a cell wall and then "digest" the food by absorption.
Now back to the film discussed above, in which science-fiction so exquisitely and relentlessly speaks of what is quite real here on Earth. Remember the "Tree of Souls" with its gauzy fibers that the Na'vi can connect themselves into to link with the ancestors? Turns out that whole concept is more science than fiction also, as an amazing book called MYCELIUM RUNNING

(subtitled "How Mushrooms Can Help Save the World") by Paul Stamets confirms.
Stamets champions the importance of fungi, of which the familiar mushrooms are only the visible fruiting bodies. The major organism of fungus is the mycelium, those fuzzy white fiber you find under a rock or log in forest soil, a pale fluff mostly underground that is vital to the health of living soil and forests worldwide. It's not so obvious, still we totally depend on the mycelium.
According to Stamets the mycelium is Nature's Internet--a crucial element of the living web. So back to that wondrous Tree of Souls . . . it's all a lot to digest, isn't it?
Clearly an ecosexual is the only thing to be!
__________________________________________________________________________
(BTW please check out Annie's site too: www.loveartlab.org )
Posted by Bruce P. Grether at 9:16 AM