The Universe Swarms with Life! 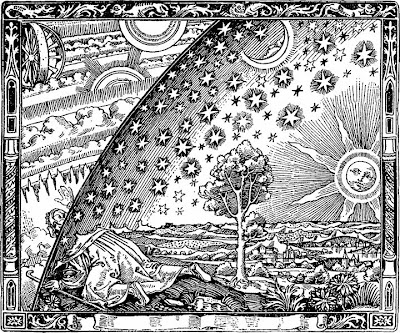 I’m on the Ravine Bench just outside the southern gate of Paradise Garden—1:20 AM. The frosty stars are somewhat challenged by brilliance of the gibbous Moon that swims in place above the western hills. Still, there are plenty of stars visible as I lie on my back along the barn wood seat, bundled up in the delicious cold, eyes wide for a meteor shower that is supposed to be peaking right about now…
For a short while, I wonder if the meteor shower is over, or if I need to be looking in a certain part of the after-midnight sky? I forgot to check about that last detail. At any rate, before long, a tiny streak of light drops across the southeastern heavens above. It really seems like something dropping into the atmosphere, I think, like falling stars really do seem to fall, not move across—somehow!
Now and then another luminous scratch drops into the Earth’s atmosphere and my entire body smiles inwardly with the delight of feeling so connected with the world I’m in and part of. Despite the nice winter chill (a delicious contrast with the hot dry summer we had) I’m feeling warm inside, warmed by happiness.
There is a brief flurry of meteors, however nothing too spectacular; I realize perhaps I’ve come out a bit late. No regrets, however—the connection has been made!
Plus I’ve already noted before I saw the first one, how the human body and nervous system detects something even more fascinating: after I first lay down on my back, full of expectancy, at first I began to think I saw little tadpoles and fishlets of motion upon the inky vault overhead. It teemed like the minnows when I sprinkle flakes of food on the lily pond…
This was almost a sort of swarming texture here and there… and while I was not literally seeing motions out there, in a sense, I observed motions within myself that spoke of something totally true and actual. Within and Without are One. The Universe is alive; everything is sacred. Anything less than this, and we miss the boat, we begin to judge and slaughter. Better to just clean our inner energy constantly.
Yes, I could see what I know via gnosis: Everything is alive!
Posted by Bruce P. Grether at 2:59 AM