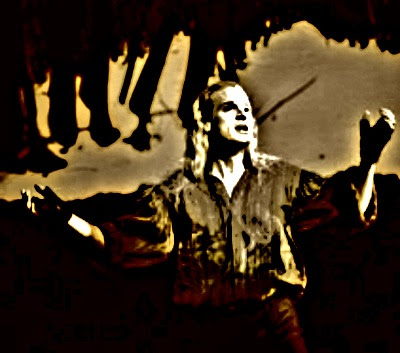 I'm still a big fan of Anne Rice and pleased that she's returning to the gothic genre with THE WOLF GIFT to be published soon. I read INTERVIEW WITH THE VAMPIRE in 1976 when it appeared and no one knew who this woman that wrote it was. Been hooked on her ever since.

It's not easy to believe it's already been six years since the brief run of the muscial LESTAT on Broadway, an amazing and promising show that involved a lot of mega-talent, yet was dreadfully mis-managed by Warner Brothers which funded it and apparently knew little about producing stage musicals. At a cost of many millions, it flopped big-time, fast, but not because it was a bad show.

Any of you who are Anne Rice fans may recall this. Elton John and Bernie Taupin wrote wonderful lyrics and gorgeous music. The handsome and gifted Hugh Panero played the lead, and the fabulous Carolee Carmello played his mother Gabrielle. Both are tremendous actors with great singing voices. Perhaps the show suffered creative problems and appeared prematurely, yet it deserved better than it got. It could have been great!

Though an Original Cast Recording was made, this OCR has never been released, to my sorrow. I seriously hoped to go to NYC to see the production, but it closed after only 39 performances. Fortunately I've got a rare pirate DVD shot from the audience, shaky and fuzzy and without great sound quality. Still, I recently re-discovered this DVD and I've transcribed a powerful and beautiful song "Make Me As You Are" in which Lestat's mother Gabrielle, makes a curiously Oedipal request of him to…