The Jumping Spider is a Quantum Hero! 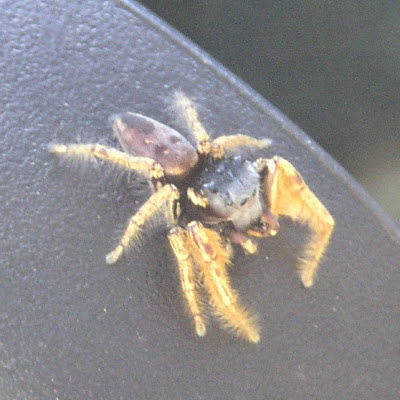 I'm reading in the bathroom--Anne Rice's superb new novel The Wolf Gift--when a tiny jumping spider appears on the page! Where from? Can't say. Maybe I was so absorbed in the story that I failed to notice his arrival.

My concern is for his safety, as I'd hate to harm him due to careless handling while I read the book. I try an intense little puff of breath, hoping to blow him off onto the nearest wall. He crouches down, like a determined mountain climber in a gale force wind, refusing to get swept away.

I smile at him, and decide to simply pause in my reading and enjoy his miniscule presence. Then in the blink of an eye, he's jumped. I see him beside the sink. Did not see him in motion mid-air, it was too fast for that, rather, it seemed he was suddenly elsewhere.

Sort of like how--on the quantum scale--we're told that certain packets of energy jump between levels of excitement in a discrete way. They don't glide there, float there, or even fly there. They jump, instantaneously. That where the terms quanta and quantum come in, meaning whole, or indivisible.

My tiny arachnid buddy seems to do this, as he again jumps and reappears closer to the faucets for filling the sink. Seems is the operative term of course. I know he didn't make the transit instantly, not literally. Still, on his scale, he's so quick, it looks like it to a titanic creature like me!

The whole thing is indivisible anyway, in that actually no separation exists between me and this tiny spider--we are One. In fact, I feel honored, as he's a magnificent creature with a fascinating face and incredible mobility. He's totally worthy of admiration.

This little guy reminds me of how the tiniest things can tell us a lot when we pay attention. In fact, sometimes the nuance gets lost in the "bigger picture."