Rupert and the Summer Stars 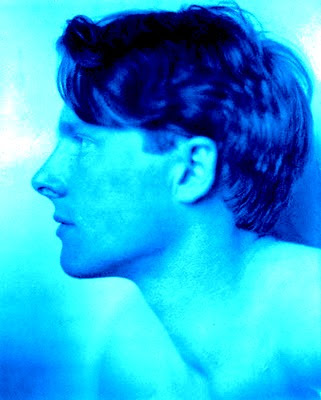 As a boy of perhaps 5 or 6 I recall seeing for the first time large illustrated books—something between a storybook and comic—with four beautiful colored panels per page: THE ADVENTURES OF RUPERT BEAR collected from the London Daily Express. Rupert is (still today!) a young bear, white in color, who wears a red sweater, plus a long yellow scarf that matches his checked trousers. A pure-hearted soul, he lives in a magickal version of England. He encounters baby dragons, pirates and gnomes and has nice friends.
Many years later as an adult in my late 20s, in the Rocky Mountain village of Estes Park, at a store called Noah’s Ark, I discovered a stuffed toy version of my beloved old friend! Rupert is really my inner child that never forgets that the world we live in is a truly magickal place!
Around the same time in Colorado I also learned about the English poet Rupert Brooke, an intriguing fellow who died at the age of 27 years during WW I. Brooke probably caught my attention initially as only the second personage I’d encountered with that engaging first name. Brooke, however, exerted a different sort of fascination as an extremely beautiful and gifted youth who died young to become immortal.
He loved to go barefoot in the country, wore his blond hair a bit long, and liked to bathe naked in the Granta River at a place called Byron’s Pool. To startle his friends, he would emerge from the water with a full erection! He was something of a free spirit early on. A genuine golden boy, the poet Yeats declared him “The Handsomest Man in England.” Both men and women fell in love with him, often on first sight.
Initially Brooke’s close friends were part of what became known as the Bloomsbury Group—a set of early bohemians in the UK around the turn of the previous century. These included such literary luminaries as Virginia Woolf, Lytton Strachey, and the painter Duncan Grant. Brooke later traveled to America and the South Seas. Unfortunately in his last few years as the Great War began, he grew apart from his largely socialist, pacifistic friends. Along with comrades in arms, he was sent to Gallipoli, though he never got there.
For some reason, he came to hate himself and may have even had a sort of death wish. He suffered a certain amount of conflict over his sexuality, and also the very existence of adult sexuality itself. In fact, his favorite play was the new hit PETER PAN and he saw it at least ten times!
He wrote several patriotic sonnets for which he gained sudden fame—and lost any chance of being taken seriously as a poet, for they were far from his best works. He died unexpectedly aboard a hospital ship (a premature demise perhaps caused by a mosquito bite on his lip at Port Said, Egypt, possibly complicated by lingering coral poisoning from diving in the South Seas) of “septicemia and pneumonia” near the Greek island of Skyros. There he was buried and the propaganda machine attempted to mint him into a new gilded saint. To set the record straight, his friend Virginia Woolf stated that he had been, “consciously and defiantly pagan.”
In a small used bookstore in Fort Collins, I happened upon a small, slim turquoise colored hardcover—an antique copy of THE COMPLETE POEMS of Rupert Brooke, (only 167 onionskin pages) which cemented my fascination… many of the poems are quite wonderful!
Thus my researches led me to write a play called DEFIANT PAGAN which I rediscovered not long ago in a trunk in my garage, some 20 years after I first wrote it. Now I’m studying Rupert Brooke further as I prep for a new draft. Recently I obtained the rare book LETTERS FROM AMERICA which contains much of his best writing. Many of his more revealing letters were not published until the late 1990s and I’m coming to know this remarkable, complex, imperfect fellow far better than ever before.
And yet for me, there will always be something in Brooke of that pure-hearted innocent—the little white bear named Rupert.
I now understand that there is something of both Ruperts in everyone.
Posted by Bruce P. Grether at 11:42 AM