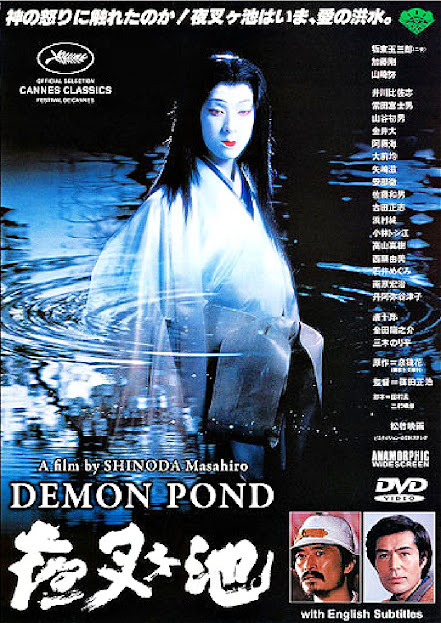 This rare, unusual work of art is among the most amazing films I have ever seen. However, for several decades the film eluded all of our attempts to actually view it in any satisfactory manner. Let me share, as briefly as possible, something of a deep dive into DEMON POND, its mysteries and magick.

Both in production terms and in my own experience, DEMON POND has a rather remarkable history. About twenty-seven years ago, my partner described a film he had seen in an art-house cinema, which continued to haunt him. It was an unusual Japanese film with a contemporary setting, yet the story delved into mythic dimensions. It included animals, spirits, and mythical creatures.

After my partner first described the film to me, we began a search for a quality copy of the film. It had never been released on VHS or DVD, as far as we could tell. At last we discovered that an 8 mm celluloid print might be obtained for a high price and it would also be necessary to purchase a sound projector. Once the Internet kicked in, around 2000, our search continued in vain. Even in Japan, when my partner traveled there, he could not obtain a copy of DEMON POND.

Sometime after 2010 we obtained a copy of a DVD copied from copies from copies. This teased with a grainy, almost indecipherable image and very poor sound: a frustratingly poor quality experience, merely suggesting how spectacular a good copy would be.

Then late last year, after having pretty much given up hope several years before, on some kind of impulse I searched online. There it was! A site: "samuraidvd [dot] com" offered the film on DVD for $24.95. Immediately I contacted the site, and was assured this was a legitimate offer of a quality copy. I ordered it and so it is!

What a remarkable experience to finally enjoy the film in clear resolution, full color and sound, with quality subtitles that can be turned ON or OFF!

Bando Tamasaburo, a great Japanese Kabuki actor know for performing female roles onstage, plays two very different women in the film. One is a humble young woman, the other a regal Dragon God that rules in Demon Pond. His performances comprise a stunning tour-de-force. Unless the viewer is looking for it, you might not realize the role is played by a man. This actor has mostly done stage work and only appeared in a few films. In the year 2012, Bando Tamasaburo was declared a Living National Treasure of Japan, and has many other honors.

Because DEMON POND dates from long before the use of sophisticated CGI for imaginative creatures and settings, it relies on what are called practical effects: actual settings, sets, costumes, and makeup filmed without digital trickery. Partly because of this, the ingenuity and artfulness of the production achieves unusual levels of artistry.

Like many Japanese films, this story moves from contemporary urban life into rural spaces where more traditional modes of being survive. A young scholar from Tokyo travels by train to a remote village where his encounters lead him in the direction of legend, folktale and even the subconscious realm where Spirits of Nature dominate the narrative from"below." The performances and the story are phenomenal. The tale is moving, tragic, enchanting, profound and catalytic.

The literally cataclysmic conclusion of the film represents the kind of humbling before the forces of Nature that every human being experiences when we discover that a deeper dive requires surrender to something more ancient, vaster and deeper than the illusion of the individual "self" so prized by self-indulgent Western cultures.

This confirms to me why my partner carried that obsession for so many years. Sometimes dreams come true, when you don't let them die!

Here's one worth wishing for and you can fulfill the wish.