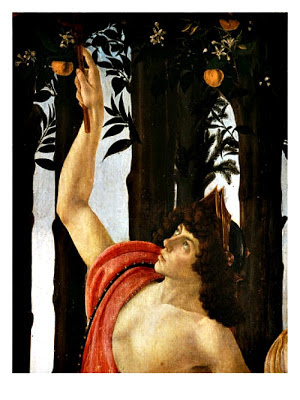 It was Marius—when I recently re-read BLOOD AND GOLD—who ushered me back to revisit Armand. THE VAMPIRE ARMAND has always been among my favorites of Anne Rice’s Vampire Chronicles, only partly because of its strong homoerotic and bisexual themes. The historical periods and places come vividly alive, and the story deftly weaves strands into all of the other VC novels. As usual, those who may think Anne Rice ever repeated herself with this series are not paying attention. Each of the VCs creates a totally new experience. While sometimes they examine familiar portions of the web of narratives from very different viewpoints, each look yields truly unique aspects of events and characters.

Armand manifests two strong and parallel tendencies of human nature, both as a mortal and as an immortal, which are the desire to belong to someone and depend on them, and the desire to have others belong to you. Neither of these—and of course they most often co-exist to some extent—is necessarily perverse in any way; however, such needs always amplify the bitter-sweetness of both human and vampire existence. The bitterness includes rejection, betrayal and terrible loss. The sweetness may seem to make existence worthwhile, yet it can also evaporate at any moment.

Though I appreciate the performance of Antonio Banderas as Armand in the film INTERVIEW WITH THE VAMPIRE his appearance was not quite right for me. I prefer how Armand appears in the novels: an eternally beautiful teenager with flowing red curls. His angelic appearance belies the fact he can suddenly become the Angel of Death. Yet I always sense a deep inner core of Armand that not even kidnapping, slavery, prostitution, emotional turmoil, killing, horrific loss and other travails can quite destroy. His Original Innocence seems to survive somewhere beneath any tarnish upon that lovely, ageless exterior, even if it lies buried and he often keeps it well hidden.

Like many other readers I absorbed ARMAND for the first time in 1998 still unsure of when, or even if, our beloved hero Lestat would ever emerge from the comatose state in which he lay since the wild conclusion of MEMNOCH THE DEVIL. (SPOILER ALERT! LOTS OF THEM!) That remarkable adventure left both Lestat and us as readers uncertain whether Memnoch actually was anything like the Christian Devil, or merely some kind of potent spirit playing cat and mouse with him.

However, there was some evidence: the veil Lestat brought back. Lestat claimed it was the actual, original “Veil of Veronica” from the legend of a woman who was said to have wiped the face of Christ on his way to Calvary with her veil, when the cloth received a likeness of his face upon it. Considered a great relic, the fate of the actual veil was unknown for certain in modern times—until (in the VC universe) Lestat brought the veil back from his experience of some kind of “Other Side” or time travel about two millennia into the past.

All this serves as a preamble to Armand consenting to tell his own story to David Talbot, now an immortal and sort of scribe since THE BODY THIEF. While Lestat remains out of it, Armand agrees to David’s request. Clearly Armand survived his evident burning in the sunlight at the end of MEMNOCH, when he went to view the veil on public display. We learn that he was badly burned as he flew up into daylight and tumbled into a building. (Thus the inverto of the original cover art.) Though damaged, Armand managed to telepathically contact a girl and boy named Sybelle and Benji, who rescued him and when he recovered, he had fallen in love with them both.

Armand’s journey seems to broadly echo that of Anne Rice herself, from a childhood of faith, young adulthood of questioning and moving away from faith, and an eventual return. ARMAND was published in 1998, the same year Ms. Rice returned to the Catholic Church, and though in 2010 she publicly disavowed Christianity and all organized religion, she retains her own strong personal, private faith.

Long before ARMAND was published, I viewed the VC overall as a journey in the direction of faith—not organized religion—so much as a quest to retrieve the spiritual significance of existence. Armand journeys from icon-painting Eastern Orthodox boy, to become master of his own satanic vampire coven who no longer feels God answers prayers if God exists at all, back to such a shattering return to faith that he feels ready to end his existence—or thinks he is.

Near the end of the novel, Marius asks Armand about his own vision of Christ when he looked at the veil. Armand repudiates all typical religious descriptions of who and what Christ may be. David presses him for more specifics and, Armand says, “He was…my brother. […] Yes. That is what He was, my brother, and the symbol of all brothers, and that is why He was the Lord, and that is why His core is simply love.”

Almost immediately after this scene, some of the contemporary vampires are gathered under the stars, and Armand is adjusting to the fact that Marius gave his mortal children, Benji and Sybelle the Dark Gift against his wishes. Unexpectedly Lestat returns to them, conscious though he seems groggy and still weakened, Sybelle’s piano playing has awakened him.

I do not suggest too strong a parallel between ARMAND and the author’s own journey away from religion and eventually back to genuine faith, still it’s among the greatest themes in existence. This time as I re-read this magnificent novel the return of Lestat seemed to me a kind of resurrection with genuine emotional impact.

I’ve always felt that a major theme of all the VCs is how, mortal or immortal, we hunger for the warm-hearted companionship of others at least as much as we wish to survive in some form, and Armand exemplifies this in many way. His return to some variety of faith also inspires him to try to have more trust in others, such as David and Marius.

I do love Armand himself, though his role in the destruction of Claudia still troubles me. Now he points me back to Merrick Mayfair. She is the one who eventually, fully awakens Lestat from his hiatus, after Louis attempts to destroy himself over the matter of Claudia, and Lestat must help revive Louis. Ah, what a tangled web!

Thus the next VC for me to revisit is MERRICK.