Passionate, Exquisite Prose for Our Times 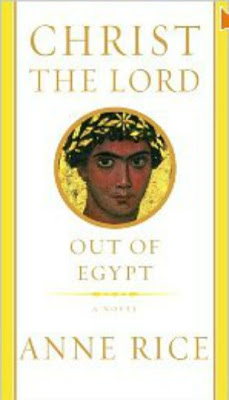 Like many of Anne Rice's long-time readers, when I first learned that she had returned to the church, I did not know what to think of it. When her first novel about the life of Christ, CHRIST THE LORD: OUT OF EGYPT was published in 2005, I was probably feeling withdrawal from the regular appearance of Anne's novels, which I had been reading regularly since 1976.

So I have an exquisite hardcover First Edition of this book, which was delivered to me on its publication date, because I paid for Second Day shipping. Though stores cannot put a book out legally before the lay-down date, mail-order book sellers can send books ahead that will ship a couple of days early.

What amazes me about Anne's Christ novels is first, the sheer audacity of depicting the Life of Christ in first-person narrations. Something else amazing here is that the novel is free of dogma, cheesy miracles, or silly special-effects. And though Anne did major amounts of research for authenticity, near the very beginning is an allusion to one of the non-canonical "Childhood Miracle" Gospels of Jesus. Let me not SPOIL any surprises, but this vivid reference near the very beginning of the book refers to clay birds.

I suppose I should post a POSSIBLE SPOILER ALERT for anyone who might wish to go into the novel with no idea of things to come. Two remarkably powerful things for me were Anne's description of the animal sacrifices at the Great Temple, a virtual mist of blood, and young Jesus's reaction when he hears the story of King Herod and the male children under age 2 years. This is one of those gripping moments that Anne offers in every book, usually quite a number of them, that really grabs you.

For years I've felt that Anne's publishers honor the class, quality and elegance of her writings with the hardcover First Editions that have deckled edges, gorgeous fonts, classical art on the covers, and sometimes gold. It's the treasure chest of the stories and the language within those lovely covers, however, that really matters. Anne writes in what seems to me a white-hot inferno of activated imagination, in which as she SEES the story, it flows through her fingertips through the keyboard into the novel.

Some people complain about the simplicity of the words in this narrative, as if not recalling that Jesus at the time he tells this story is 7 or 8 years of age. His voice is that of a boy that age, who is also aware that he may be something more than an ordinary boy.

In this book and the followup three years later, Jesus was brought to life as a human person, also divine, as never before for me. I've read the New Testament and the Old, and what I love about this novel of Anne's is that it is not propaganda for a religion. It is the story of a boy talking about his life some two millennia in the past.

Anne has moved on in her personal life, and as I always said to my friends, she's highly intelligent, a good person, and she did not lose her marbles when she went back to the Catholic church. However I'm proud of her because she keeps moving.
Posted by Bruce P. Grether at 3:04 PM