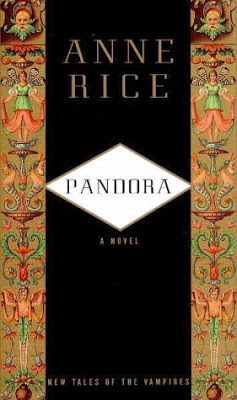 When the astonishing, elegant, and relentless Anne Rice published THE WOLF GIFT earlier this year, I was transported, as always by her remarkable prose. The new Man Wolf Saga (she tells us the next one comes in 2013) whetted my appetite to return to her magnificent Vampires.
Only where to enter?
PANDORA has become my new entry point. She appears first in THE VAMPIRE LESTAT and QUEEN OF THE DAMNED, as a sometime-companion of Marius, a somewhat sad, unhappy character, though she always intrigued me. In her own story, which she narrates, the novel PANDORA begins as David Talbot (post-BODY THIEF) persuades her to write in a couple of beautiful notebooks. I will try not to give major spoilers, but be forewarned, if you want to go into her story with no idea of its riches. (SPOILER WARNINGS: SORT OF!) Pandora’s words sweep me back two millennia to the Rome of Augustus, an era that comes totally alive. Her first meeting with Marius when she is a prominent Roman’s young daughter and he a tall, handsome “barbarian” dazzles me all over with premonitions.
Originally called Lydia, she narrates this vivid and totally plausible history, both personal and broader. When she purchases a handsome one-legged slave named Flavius, we are enriched with the kind of utterly believable and quirky character Anne frequently creates. Flavius prefers boys, yet Pandora clearly loves and wants him as a lover. Eventually Pandora persuades her first crush, Marius, to give her the Dark Gift, though she soon comes to regret it. They become a perennial couple, in some ways like Louis and Lestat—unable to live together, or to totally disconnect emotionally.
Towards the end of this marvel of characters and scenes, again the Rice magick unfolds a strange and lovely vignette that involves an elderly monk, beehives and a sort of scarecrow—unlike anything a lesser imagination could invoke. It blows me away! The book is profoundly about the need for companionship and how difficult our human nature can make that to sustain.
Now I know I can trust these characters to call to me, and I need not think about where to go. Of course, Marius wants his say, so from here it’s to BLOOD AND GOLD, for his side of things. Plus I already see that his beloved from the Renaissance, Armand, will probably want my attention next. Ah! Amazing how these beings truly live, and yet they are undead!
Bravo all over again, Anne Rice, and much gratitude and love for the riches you gift us with in your tales.
Posted by Bruce P. Grether at 2:58 PM