My First Glimpse of Janis Joplin (JANIS & ME Introduction) 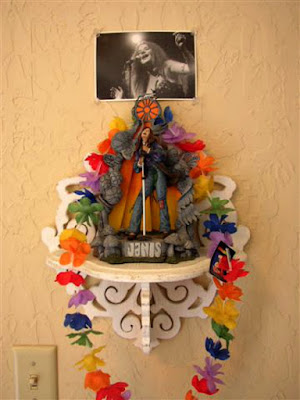 Summer 1969: In great excitement and awe, we’ve come with thousands of other people to experience a performance by Janis Joplin. We’re two boys in our middle teens, good friends for some years now, dressed in long white shirts of East Indian style, with headbands about our brows. My pal, Jeff Berg, drove us in his battered green VW Bug from Silver Springs, Maryland, to the concert site in the lush green countryside.

From the parking area we cross gentle slopes, past a pond, to the Merriweather Post Pavilion for the Performing Arts.

The facility is partly outdoors, though the central part of the audience beneath the roof has seating and the stage is covered. We locate a position under the sky on a sort of grassy slope well above, yet close to the stage, at a railing where we can see look down upon the performance area from a side angle.

An amazing group, The James Cotton Blues Band performs, yet we’re ready for Janis herself. We’re totally buzzed with anticipation.

The opening act finishes, and after the stage is cleared, the roadies arrange the equipment for Janis’s set. Finally her band’s equipment is all arranged and connected and some musicians have taken their places, including a small horn section with Snookie Flowers on saxophone. This is the line-up known as the Kozmic Blues Band. A few sounds tests add to our agonized impatience as the last of the daylight fades away.

Everything below us on the stage appears clear and jewel-bright.

When the first loud and rich-sounding chords of music are struck, I’m electrified; every hair on my teenaged body stands up! I’m so focused that my brain records the experience in great detail! The entire evening remains vividly intact in my brain now more than forty years after the event.

Janis actually appears running from the wings of the stage to the microphone that perches on a stand at the middle in the front. How on Earth does she actually run in those heels? Yet she does! She wears what appears to be a purple silk pant-suit with bell-bottom trousers, matching purple and pink and white boas attached to her long, flowing hair. Of course, she sports a mass of necklaces and what must be a million bracelets on the wrist of her right hand.

She grabs the microphone and does a little hop of excitement in place—despite the purple high-heeled pumps. She tosses her head back with a flourish of flying hair and feathers to deliver an unearthly, gorgeous, almost terrifying wail that speaks of not only enthusiastic greeting, but a generous dose of passionate longing, outrage, affirmation, seduction: agony and ecstasy.

More ecstasy than anything!

Her fist goes up beside the mike gripped in her other hand, pushed close to her lips. The fingers of that fist fly open with the next sounds that launch from her mouth, and her rapid, even frantic gestures nuance, seduce, grab, stab, caress, punctuate, rip, ripple, tickle and tease the air in synch with that rich, raspy, and entirely unmistakable, totally astonishing voice.

Is she singing two notes at once sometimes?

It seems as if the entire world is still holding its breath.

It’s “Raise Your Hand,” and actually, at first I do not levitate to the same extent I will with the more familiar songs. Momentarily, I’m stunned at the unfamiliarity, and shaken that I’m not sure I like it as much as her albums. This is one of those songs I do not already know from recordings, still the sheer excitement of actually seeing and hearing Janis at that moment overrides everything else in my existence! Nothing has ever in my life so fully grabbed my attention, as she does…

There she is, alive on the stage, belting it out, and as always giving more than 100% of herself. There are no throwaway performances with Janis, I realize.

Every shriek and gasp and coo comes from her core.

She’s a totally riveting whirlwind before our eyes; a genuine force of Nature!

She gives everything she’s got.

Love mixed with intense gratitude for this special experience pours back at her from thousands of opened hearts.

This is an uncanny experience of what the Hindus call “darshan,” the presence of a holy person that in and of itself bestows grace.

Though that first song does not actually disappoint, the next, “Piece of My Heart,” is the one that first lifts my feet off the ground; I will not touch down again that night.

Later, with an exquisite rendition of “Maybe,” the powerful horn section truly shines brilliantly, and this woman’s ability to match the power of the brass with her voice, reveals a new mystery. At the end of this song, Janis has to extend both hands open, one with the microphone between thumb and first finger, to request a hush from the audience so that she can deliver the last liquid note, which then brings down thunder and the first of many standing ovations.

Of course, Jeff and I have been standing and dancing in place all along.

When the time arrives for Janis to sing one of her most famous songs, like a sort of inevitable, yet humbling and privileged ritual of the throbbing mass of excited humans—comes a total surprise. In fact, we don’t even recognize the song at first! The new instrumental introduction sounds classical. It’s a sort of brassy Baroque horn fanfare, an elegant and sweetly-rambling intro that keeps us guessing—what is this song?

What song can this be?

There is a certain playfulness to this deception.

A sweet, insinuating, piercingly pure and somewhat nasal note: “Ssssssummuh-taaaaahhhhhm . . .taaahhm, tahhhhm-tahm . . .” Her voice levitates everyone present higher than ever with a unique clarity and purity such as we’ve never heard yet. Of course, it’s “Summertime,” not only a show-stopper, but a musical sacrament for the faithful. Strange, isn’t it, how the blues can make you feel so incredibly good!

That voice reaches out unlike anything I’ve ever heard or felt and with unparalleled intimacy Janis opens a door to the heart.

The sound system is incredibly loud and it continues to ring in our ears after the concert concludes following several exuberant curtain-calls. At last after a lengthy and unbelievably profound rendition of “Ball and Chain”… with my friend, I’m stumbling beyond words towards the parking area…

Some ineffable quality now seems to connect the dots of the stars in the heavens above and the atomic stardust within our bodies.

Before we get back to the little green VW Bug, we sit by a pond and stare at the reflections on the water for a time as other concert-goers continue to stream past us. It’s as if we need a speechless spell to process what really cannot be understood or grasped.

Janis may have left the premises, only she’ll never leave my heart.

I’ll never been the same person.