ORCHID OF AWAKENING is now available!!! 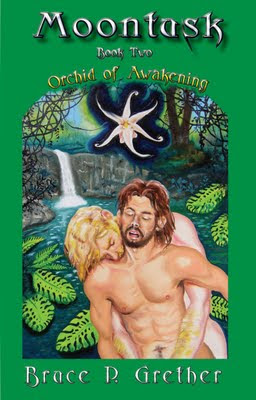 Dear Friends and Internet Wanderers…
I am so excited and pleased to announce today that Book Two of The Moontusk Chronicles, my new novel Orchid of Awakening is now available.
About 30 years ago in 1981 I had a vivid dream about a privileged young man named Dare who was the heir to a kingdom. He hated the oppressive ritual and responsibility of his inherited role, so when his tutor died mysteriously he freaked out and ran away from home. He was accompanied only by his beloved dog. This dream felt so real and vivid that I wrote it down. The dream became the doorway into a fantastic world in which the moon has rings and wooly mammoths survive in the northern mountains… among many other wonders!
Over the next few years I expanded that story into a novel, and several different friends read and critiqued it--an extremely helpful process! The only major change from the original dream, except that it went on and on, was the dog changed to a cat. In "real" life I had been adopted for the first time by a cat and his name was Taliesin. Of course in the novels he became the chameleon cat, Maumet, who can camouflage himself and plays a crucial role throughout.
At one point, I realized that I had written only half of the story, so I continued and this grew into even more of an epic. The bloated manuscript of close to 2,000 pages finally broke itself quite naturally into four shorter novels. Eventually Dare met another young man named Hosis, and they fell in love. Meanwhile I had met my life partner, Tomas. The world that Dare and Hosis lived in underwent a dramatic transition as its patriarchal empire was overthrown by an army of women…
Though the novels are classified as "gay fantasy" and called "frankly erotic," there is a great deal more too them that a hot love story. (I'm intrigued that apparently more women read this genre than gay men, and I hope others will also enjoy them!) You enter a complex, detailed, engaging plot and various stories unfold within that. You meet all sorts of characters, men and women and other races of beings, as well as a host of animals, more ordinary and very strange creatures. You eventually visit all sort of amazing places in the process.
Now after all these years, Book One: Rendezvous in a Ruined City was published earlier this year and now Book Two has arrived! I'm also busy starting Book Five, The White Mammoth, as it looks like my publisher Lethe Press will put out one novel every six months or so.
Apparently it pays off to follow your dreams and work hard at your bliss…
Learn more and you can also purchase Orchid of Awakening (also Book One if you need to catch up) through this LINK.
In profound gratitude,
Bruce P. Grether
Posted by Bruce P. Grether at 7:35 AM